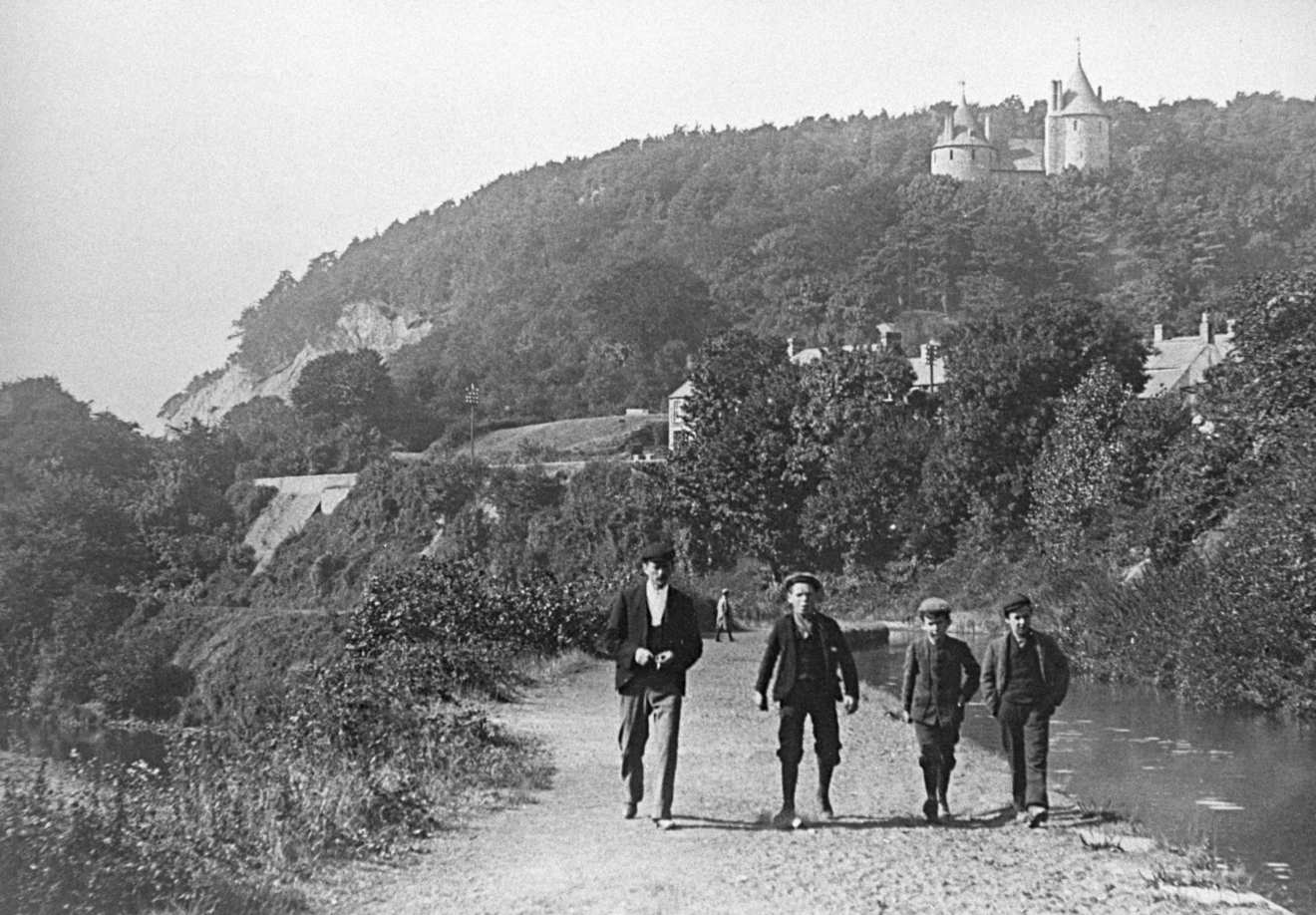 There seems to be no end to Val’s literary talents.  Here she shares 3 poems about characters from the village starting with her Grampa.

Every day the same for him: each and every day
Was spent in doing nothing! Just existing. In his way
He managed nicely, to me he seemed content,
But I was young and couldn’t know how great was his torment.

I grew up becoming used to seeing him in his chair,
Whenever I went to his house he was always sitting mmm
His chair gave him no comfort, it was made of wood, and here,
He sat for hours, each day, each week, each month, each year.

His movements were so slow and laboured, he could not  proceed
At more than snails pace. He had to cling to rails. Indeed,
The time he took to reach the bathroom took an hour,
He managed without help, so great was his will power.

His days were often spent alone: my grandmother couldn’t cope
With being in the house with him. She left him with the hope
That he’d manage to get by until she would return.
I wonder now, how did he feel: did he for company yearn?

On the hob beside, before she left, she’d leave a pot of tea,
A cup and saucer, milk and sugar, cheese and bread and he
Would spend the day just sitting there, with nothing else to do,
Except read the Daily Herald, and he had his wireless too.

The programmes that he’d listen to, on the BBC Home Service
Were often difficult to tune in, causing him to be quite nervous.
He’d have to twiddle with the knobs till the hissing had abated,
Then at last sit down to listen to his programme, long awaited.

He rely had a visitor for they would find it hard,
To have a conversation: not only was he scarred
By loss of movement, he couldn’t speak a single word.
The noises that he made were grunts. Embarrassment occurred.

He loved to see me coming, he thought so much of me,
Especially when I’d take him some Welsh Cakes for his tea.
Sometimes, I’d take some friends with me who’d stare as he ate his food,
And in no uncertain terms I would tell them they were rude.

Today, this wouldn’t happen, this happened a long ago,
When there was no medication to release him from his woe
He died, aged eighty eight, a man whose life was so unfair,
I will never forget my grandpa, and his wooden chair.

Poem Two – Mrs Bassett lived in what was, in my knowledge, probably the, or one of the oldest houses in Tongwynlais at the time of its demolition in the mid 1950s. With her husband, Dick and their very pretty daughter, Eire, they lived at No. 15, I guess, Mill Road.  They were condemned by the local council as being unfit for habitation in 1956, the residents moved to newly built flats on the fast growing council house estate, Pantgwynlais.  What a difference this must have made to Mrs Bassett.  But, how did she cope with such a colossal change?

The cottages are not there now, they’ve been gone for years
So old were they, so small, so crude, with no facilities
The outside walls were pitch and daub, covered with wash of lime
Today they would be preserved as relics from a long gone time.

Four of these were opposite the house where, as a child,
I lived, and even now the hardship is in my memory filed.
In one there lived a lady, she never left her home:
she couldn’t, she was doubled, no distance could she roam.

We’d see her at her cottage door, bent and  shaking madly,
Dribbling, calling for some help. We treated her so badly!
As kids we didn’t really understand, we’d do our best to hide,
To us she was an ugly witch who’d on her broomstick ride!

If she was standing, waiting to see somebody pass,
We’d run away so speedily: it was inhumanity, crass.
Now, I understand why she appeared the way she did!
Parkinson’s had taken hold and her best features hid.

I’ll remember Mrs. Bassett, until the day I die.
For she was left so much alone: to help I didn’t try.
When older and much wiser I learned about PD,
It was too late for she had left her life of misery.

Although an octogenarian,  I have a heartfelt shame:
instead of giving help her, I chose to play a simple’ childish game.
No harm was done, no damage wrought, yet my mind still is reeling:
When I think of Mrs. Bassett, I still get a guilty feeling!

Poem Three – A pen portrait. of Mrs. Wilfred Thomas, whose husband, Wilfred had a long lasting relationship with Hermon chapel.  He was a teacher in a  school in Caerphilly at a time when motor cars were rarely seen, leg-power it was the only transport. He and his sister walked the route from Tongwynlais to Caerphilly via Mill Road, Castle Road, Watford, then on into Caerphilly.This beautiful walk is no problem when there is no time limit and you are free to stop to enjoy the glories of the forest, that were greater than they are today. The reason for there being fewer trees since WWI and WW2 is because they were cut down to make props for the trenches and any other reason required for the war effort.

Think of this daily commitment, in all weathers on a mud pathway, having to arrive at school earlier than 8.30am. There was no allowance given for lateness, and there was always the thought in mind that the same journey would have to be made to return home. They arrived home at no earlier than 6.30pm, having set off at 5.30am.

But Wilfred’s is day didn’t end there. A charismatic and a born teacher, he would  gather children from the village to meet at Hermon Chapel, where he would have a warm fire blazing, and for the next hour he would captivate the minds of children of all ages by telling in his own words, in his wonderful, lilting voice, stories such as Tom Sawyer, Uncle Tom’s Cabin, A Christmas Carol and more. We sat, taking in his every word, feeling sorry when he came to an end. The group’s name was a Band of Hope.  These meetings were for some their first introduction into literature, and a means of instilling the best principles of living in those who were privileged to come under his wing.

This daily journey to Caerphilly came to an end in 1914, when he joined the armed forces, joining the army to do his duty for his country in WWI, reaching the rank of Major, although he never used the title. He was mentioned in dispatches.  Major Thomas later became Headmaster of Eglwys Wen, Whitchurch Primary School before eventually leaving the teaching profession, and taking employment with HMRC.

A seemingly grandiose woman was she, with manner so refined,
She wore fine clothes, was always smart and exceptionally kind.
She had such a strong impression on me: I was born into working class.
She made me realise early that I was a poor simple lass.

She was friendly, kind and helpful, quietly spoken – not loud
Nor boastful and seeking attention, yet she’d always stand out in a crowd.
She had certain charm and charisma, was always well liked, had no blame
For any wrong doing or action. Her life was well lived without shame.

She was gentle and showed in her living a total commitment to God.
Both she and her husband were Christians, and Christian pathways they trod.
The time came when it was apparent that something was wrong in her life,
Changing her outward appearance and causing her feelings of strife

Her body began to show tremor that couldn’t be hidden at all,
In such a short time her body had changed, she’d shuffle, shake and fall.
My thoughts at this time made me question the concept of God given love.
If God’s own will had approved this, I doubted his presence above.

To end life with Parkinson’s problems, a complaint so horrific to bear,
I thought was so sad for this lady, whose life was well lived, showing care.
But Parkinson’s is not selective, no one can safely depend
On escaping its dreadful clutches until one reaches one’s end.