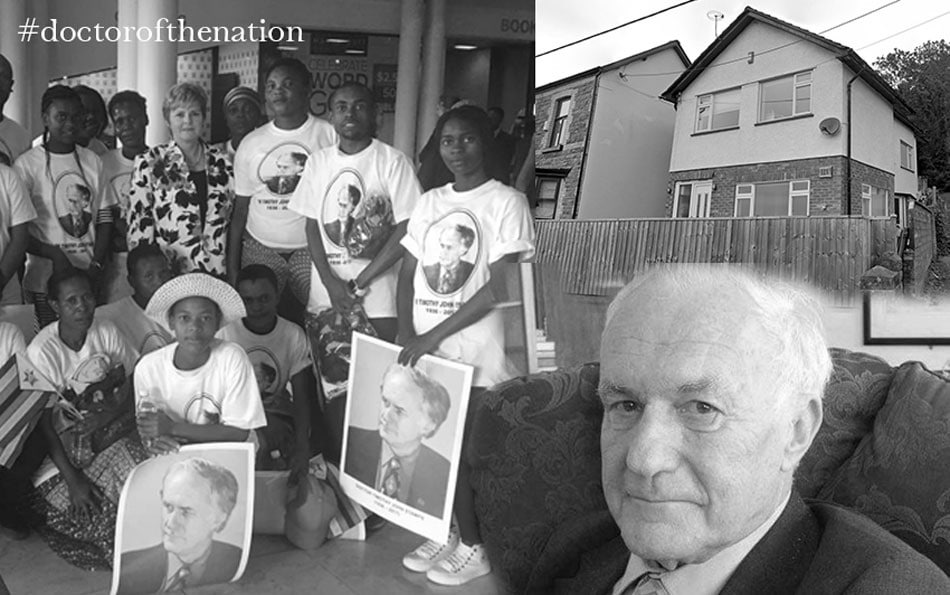 I am currently researching the lives of past Tongwynlais residents and some of their experiences and achievements are simply incredible.  This is especially true of Dr Timothy Stamps. His life took him from the little village school to the higher echelons of power, working in President Robert Mugabe’s Zimbabwean Government as Minister for Health from 1986 – 2002.  For most of that time he was the only white member of Government and was committed to the provision of community healthcare for all citizens. He became a national hero for his tireless work in public health.

Born on October 15th 1936 to Norman and Mary Stamps, Timothy became a brother to Brian 5 years his elder, who went on to become a school teacher. Norman, his father, was an RAF aircraft engineer who upon RAF retirement, moved to Tongwynlais and took up a senior management post on the engine test beds at British Overseas Airways Corporation (BOAC), based on Nantgarw Hill.  Mary, his mother, walked with a permanent limp, although no one knows the cause.  They lived in the Victorian villa next to the cottages on Castle Road.  Incidentally, the villa was originally built for the managers involved in the re-building of Castell Coch.  The family built an additional home in their garden in the 1960’s, moved in and sold the initial house.

The family were devout Christians and lived conscientiously and piously, preferring to keep themselves to themselves.  Mary was the President of the ‘Hermon Sisterhood’ and the group met each Wednesday afternoon at Hermon Chapel.  The family were engaged in missionary and aid work highlighting the plight of starving nations, especially in Africa.  This may have been the catalyst for Dr. Stamps’s eventual move to Zimbabwe (then Rhodesia) in 1962.

Val Bowden, who has contributed a great deal to THS, had first hand knowledge of the family. She has written her personal memories of her old friend Tim in the article below.

‘I once knew him very well. In fact, it could be said that he was my first boyfriend, as in friend who was a boy.’

‘Mrs Stamps was a strong-willed person, whose belief in God and spreading His word was paramount. She invited village children aged 10-16, usually girls, but occasionally boys, to attend a meeting at her home each Monday at 7.30 p.m. The purpose of this meeting was to bring the Word to youngsters with the hope that they may be converted to Christianity. The name of this group was, ”Young Warriors”!

We would spend at least an hour making tracts or pamphlets to be distributed from an aeroplane over impoverished countries of world, telling them of the Power of God and how it could Save any one who believes in Him. The tracts were made by using old Christmas Cards, trimmed to appropriate size, and sticking on them a message in several different languages, ready printed on brightly coloured paper. Then we would read a passage from the Bible followed by a prayer, and finally sing a few choruses and hymns, accompanied on the piano by me, before having a cup of tea and leaving for our homes at about 9.30 p.m. Tim would sometimes join us for the second part of the meeting, but usually he was in another room, building or creating models or fiddling with electronic devices. Once, in 1957, about ten Young Warriors were taken by Mr.& Mrs. Stamps to a Young Warriors Convention Camp, in Woolacombe, North Devon. My never forgotten experience of singing choruses almost continuously, listening to faceless individuals’ appeal to repent of your sins, the sleepless nights on a palliasse, devoid of straw, existing on stuffing sandwiches, washing each morning with cold water from a bucket, washing plates and mugs in water so dirty that it resembled soup and going to the toilet in view of others who were doing exactly the same thing, brought me to a state of realisation that this was not my idea of a holiday!

Tim attended Whitchurch Grammar School and later Cardiff Medical College. He didn’t want to become a Doctor, but a Botanist but his parents persuaded him. Tim complied with his parents’ wishes, as he felt that children should always do according to the gospel, and he specialised in Public Health. During this time he developed a passion for the well-being of people, especially the poor and needy, first in the UK but later throughout the World.

By the end of his studying, he decided he wanted to emigrate to Rhodesia, known today as The Republic of Zimbabwe, and in 1962, he was appointed to a post in Public Health, quickly progressing to Chief Medical Officer. He worked painstakingly against the forces of the day to provide equal health services to all, but he was opposed and sacked in 1974 for allegedly favouring the blacks. He then worked as a doctor in many community projects which flamed his passion for development and political activities, and he became Chairman of the Freedom from Hunger Campaign. He became more and more interested in politics and spoke with such eloquence that his audiences were spellbound. He became the ”Go -to” person for any one seeking advice on healthcare.

He was appointed Minister of Health and Child Welfare in1986, a post he held until 2002. He suffered a stroke in 2001, caused by his increasing exhaustion. He continued as adviser on medical matters to the President.

In 2002, he was subject to EU sanctions, intended to express disapproval of various Zimbabwe government policies, even though, at the time the sanctions were imposed he was retired from politics and a semi-invalid. Also, he had never been implicated in human rights abuses, anti-democratic acts, corruption or any other form of wrongdoing. He was banned from the EU and access to assets he owned in the EU was frozen. This ban on freedom to enter the UK caused him to be unable to attend his daughter-in-law’s funeral, the weddings of both his daughters, and also it prevented both his sons attending a UK University.

My personal relationship with Tim, is testimony to his concern for the well-being of others. It was Tim’s natural tendency to care and help people that led to our friendship. I missed a lot of School in two consecutive years, due to Scarlet Fever in 1955 and Rheumatic Fever in 1956. I was housebound for much of that time and Tim called to visit me regularly, bringing with him a little gift each time: a few sweets or a bar of chocolate, a book, etc,. He was quietly spoken, not really with much to say, but he was a good listener. He was respectful and tolerant. He also had a sense of humour. I can’t recall ever seeing Tim with friends: he didn’t mix well. He was different from the rest of us! Now we know why: he was of rare calibre!

His son related an anecdote in his eulogy at Tim’s funeral, telling of the time that Tim, when in medical School, once made a protest for some now-unknown reason, by taking-off all four wheels of his car, carrying his car up a flight of steps to the top of the building and refitting the wheels before leaving the car on the roof of the university building. The roof was made of glass! Tim had a car, a very old car that he had restored with his father’s assistance, and he looked so peculiar when driving it, as he was so big, that he brought a  smile to the face of everyone. Tim was always interested in learning anything. My illnesses gave him the opportunity to learn something that few doctors and nurses ever hear of and even fewer ever come across. Tim was amazed to hear that both my brother and I have Dextrocardia, a rare congenital condition, where the heart and other organs are placed on the opposite side of the body as a mirror image of normal placement. This occurs in 1:12,200 people.

As well as extending his medical knowledge, he also spent time helping me with school work, especially Maths, which was not my strongest subject. We would sometimes read poems that he liked, and I grew to like, we’d chat about various things that he was interested in, such as renovating old cars with his father. We would sometimes play piano duets, and this was enjoyable for me as it was my opportunity to display my talent and know that in this I would better him, for a change.

Having read much about  Dr. Timothy Stamps in recent days, I feel humbled yet very proud to be able to say that I was a friend of such a man: he was humane, professional, and passionate about serving the poor.  I will remember him as Tim, my friend, an extraordinary person who wanted nothing more than to help the poor access healthcare for free.

I hope that some of my memories of events that occurred 65 years ago, may be of some use to you and that you will find some way to publicise the fact that a great man came from Tongwynlais.’ 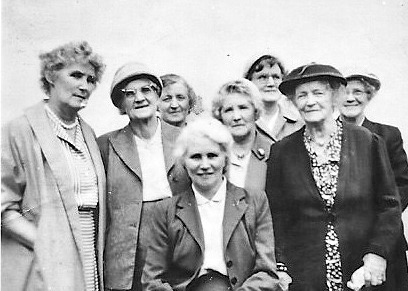 ‘The Group of Hermon Sisterhood members including my gran, Ann Davies, standing at the front next to seated Mrs Stamps.  The lady standing far left is Mrs Wilfred Thomas, a WWI veteran who was the most charismatic teacher I have ever known.  He was devoted to Hermon Chapel, giving his life to the organisation, the maintenance, – everything!’ 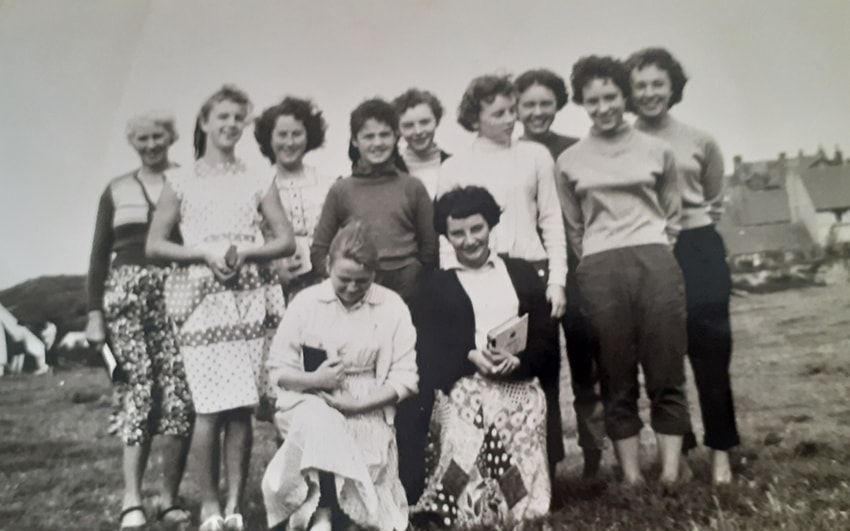 Dr Timothy Stamps died on November 26th 2017 of a lung condition aged 81 years. He was declared a National Hero by the Government of Zimbabwe and was given a State Funeral. You can still watch the funeral via this You Tube link.