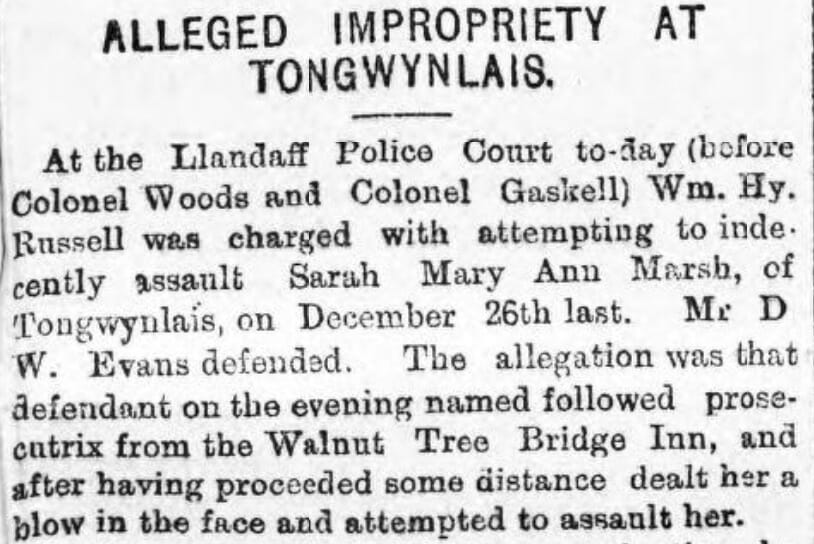 At the Llandaff Police Court to-day (bofore Colonel Woods and Colonel Gaskell) Wm. Hy. Russell was charged with attempting to indecently assault Sarah Mary Ann Marsh, of Tongwynlais, on December 26th last. Mr D W. Evans defended. The allegation was that defendant on the evening named followed prosecutrix from the Walnut Tree Bridge Inn, and after having proceeded some distance dealt her a blow in the face and attempted to assault her.

In the course of a brisk cross-examination by Mr D. W. Evans, Marsh said she had had some drink, but she had her senses about her.

Did you sing in the bar of the Walnut Tree Bridge or attempt to do so?-No.

Did you try to dance in the parlour?-No.

Is it true you tried to embrace any of the young hen there?-No, I ‘ave an old man of me own I don’t want to embrace anybody else.

Did you try to kiss any of theirs? ‘No, I got an old man.

Colonel Woods: That will do don’t enlarge. In further reply to Mr Evans, prosecutrix said she could not identify prisoner as the man who truck her a blow. The Bench, after hearing a good deal of conflicting evidence from prosecutrix, dismissed the case.