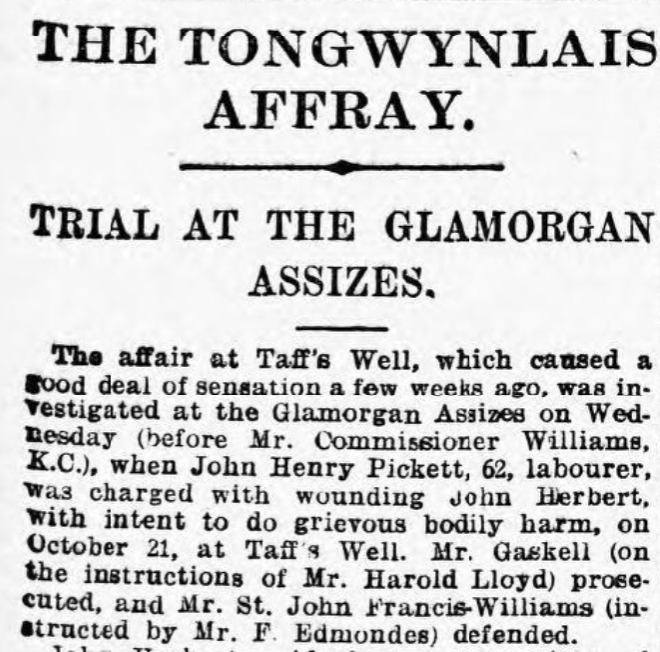 TRIAL AT THE GLAMORGAN ASSIZES.

The affair at Taff’s Well, which caused a food deal of sensation a few weeks ago, was investigated at the Glamorgan Assizes on Wednesday (before Mr. Commissioner Williams, K.C.), when John Henry Pickett, 62, labourer, was charged with wounding John Herbert. With intent to do grievous bodily harm, on October 21, at Taffs Well. Mr. Gaskell (on the instructions of Mr. Harold Lloyd) prosecuted, and Mr. St. John Francis-Williams (instructed by Mr. F Edmondes) defended.

John Herbert said that on the night of October 21 he was with the prisoner at a public-house. They walked together nearly as far as witness’s house. At the railway bridge prisoner said he had a good mind to kill him (Herbert), and he replied, “What for, Harry?” He aimed a blow at witness, which he avoided. Near the house prisoner called out, “Jack, I’ll put you right now, you Witness fetched a poker from the house, and as he came out prisoner shouted, “Jack, is that you?” “Yes, my handsome,” he answered. Prisoner shouted, “Come on, you And as he (Herbert) jumped across the weir Pickett fired a gun, and he became un- conscious.

He knew no more until he found himself in the house. Cross-examined, prosecutor said he had always been friendly with prisoner. They were talking in quite a friendly manner when prisoner first threatened him. He was not aware that he (prosecutor) was a man with a violent temper, although he had given two men, named Marsh and Rhapps, “friendly pushes.” the former being knocked unconscious. Tom Herbert, a son of the prosecutor, said that, hearing the shot, he rushed out and found his father lying on the ground bleed- ing. Prisoner said, “You had better slip it, or I will shoot you,” and he ran away.

Prisoner had something glittering in his hand. Dr. E. J. Riseley gave a detailed description of Herbert’s injuries when he (the doctor) saw him. His head was covered with blood, and he was suffering from shook- His scalp was covered with wounds. Two small ones were from gun shots, and two jagged ones on the right temple might have been caused by a Poker or other blunt instrument. There were four peculiar cuts on the neck, which met and formed the shape of the letter Y, and were also probably caused by a blunt instrument. Three cuts on the left ear penetrated to the tone, and other cuts on the face were probably caused by a sharp instrument. Altogether 110 stitches were put in the various wounds. He saw the poker, and there was blood on it. Cross-examined, he said there was no blood on the knife found in prisoner’s pocket. He did not think the wounds he had described as being done by a sharp instrument could have been caused by a fall on a sharp stone. They were cut as clean as he could have cut them with a scalpel. Police-sergeant Canton, who arrested the prisoner at his house, said that when charged Pickett replied: “I only shot at him to frighten him. He came for me ‘with a. poker, and I stopped him. ‘What would you do?” Witness produced a rusty old gun, found in the prisoner’s house. Prisoner said, “Yes, that’s the gun, and here’s the poker,” taking one from the fire-place.

At the police-station prisoner again advanced the plea of self-defence, say- tag Herbert went for him with the poker and Struck him on the arm. They had a. scuffle, and be struck him a couple of welts with the Poker. Prisoner, in the witness-box, said when he and Herbert left the public house they were on quite friendly terms. In their conversation about some fuel, he (prisoner) made a remark which aroused Herbert’s temper, and the latter “flew at him like a dog,” saying, “I didn’t steal the stuff.” He (Pickett) said, “Oh, if that’s your temper, I’m going home,” and he left him and went home. Herbert went on down the tow-path, and when passing Herbert’s house witness heard Herbert say, Give me that poker.” Soon afterwards he heard footsteps? following him, and, perceiving who it was.

He rushed to his house in an excited state. The gun was the first thing he saw, and he picked it up and went back along the path. He saw Herbert on the road. Herbert came straight at him across the weir and up the bank, with the poker in his hand. He had raised the poker as if to strike, and, coming quite close, struck witness on the arm. He then fired the gun in the air to frighten Herbert. Herbert, however, kept striking with the poker, and he (prisoner) closed with him. They struggled, and fell several times on the tow- path, and his coat (produced) was torn. Finally he wrenched the pole from Herbert’s grasp. They got up, and Herbert came at him again. Witness struck him with the poker—he could not say how many times- and Herbert fell to the ground. He walked towards the house and kicked against the gun, which he had forgotten, and took it with the poker to the house.

By Mr. St. John Francis-Williams: He denied using a knife, and said that Tom Herbert’s story was untrue. He never saw the lad that night. Mr. Gaskell suggested to prisoner that he was 53 years of age. but he emphatically said he was 62. He could not say whether it was two years ago he was married—he was no scholar. On being pressed, he said he had been married about eight years. The Commissioner: It may seem a long time—(laughter)—but you must know whether I you were married eight or two years ago. Prisoner – it’s eight, my lord. Witness admitted that he was sentenced to fifteen months in 1889 as an armed night Poacher. He had since been convicted of Poaching, but not for assault.

Prisoner further stated to Mr. Gaskell that when be fired the gun he held it away from his body and with the muzzle pointed well upwards. Herbert was then about 2ft. away. Witness, as a result of the struggle, had eight bruises upon him. Dr. J. J. E. Biggs, who, as medical officer to the Cardiff Gaol, examined the prisoner, said he found a recent and very severe bruise on the right upper arm. There were severe bruises on the backs of both hands, and also bruises”on the left knee and the side of the head. He thought they were probably caused by the poker.

He gave it as his opinion that such clean-cut wounds as had been described by Dr Riseley as being on the prosecutor could be caused by a fall upon sharp stones, such as newly-laid metal. By Mr. Gaskell: He had not seen the wounds. The jury acquitted the prisoner, and he was discharged