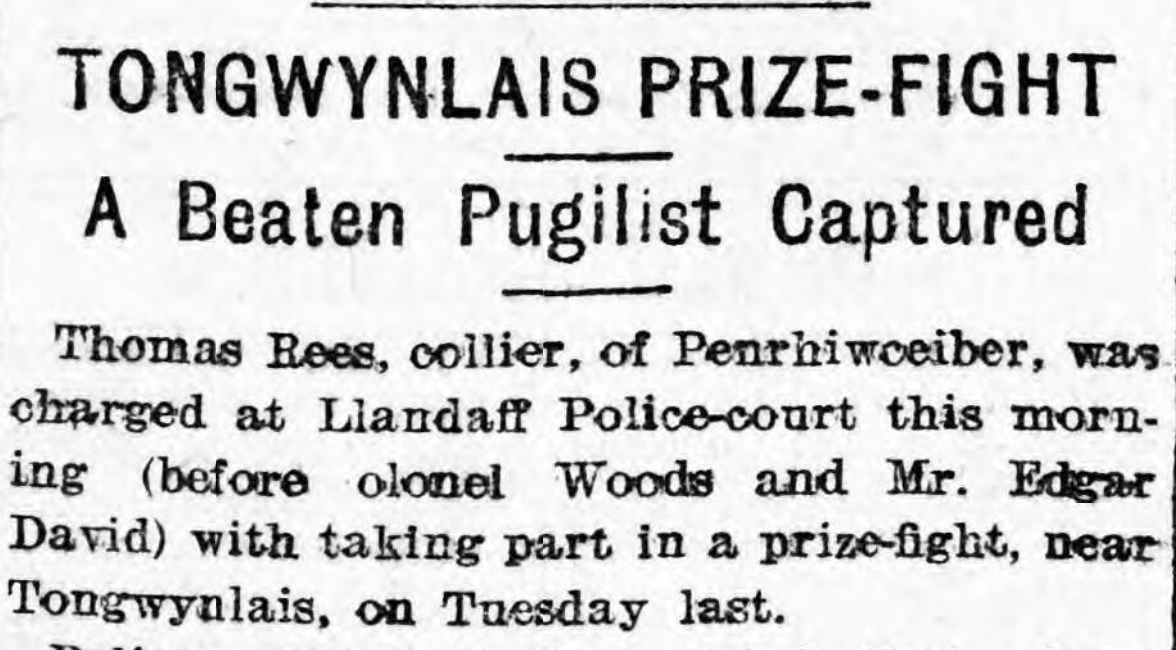 Thomas Raw, collier, of Penrhiwceiber, was charged at Llandaff Police-court this morning (before colonel Woods and Mr. Edgar David) with taking part in a prize-fight, near Tongwynlais, on Tuesday last.

Police-sergeant Canton stated that about seven o’clock on the morning of the 5th inst. he was in plain clothes, in company with two other officers. He saw a fight going on in a field near Castell Coch, and be hurried to the scene.

Amongst the crowd he saw the defendant, and heard someone shouting- “Time!” and the crowd occasionally cheering. Then someone shouted “Police!” and the crowd ran away, with the exception of Rees, who stood still. He had his coat, vest, and trousers off, and had been fighting in his under-pants. He was in a very weak state, and appeared to have been very badly punished. Rees said he had lost the fight, and witness asked how many rounds had been fought. The defendant replied that he believed it was 21, and he was then taken to Taff’s Well Police-station.

Colonel Woods: You have not got hold of the other man? Police-sergeant

Police-sergeant Canton added that the defendant was bailed in the sum of £10.

The Clerk (Mr. Evans) asked defendant if he had anyone who would become surety for his good behaviour for six months, and Rees gave the name of Joseph Thomas, a collier.

Inspector Nott intimated that he under- stood the parties were negotiating for another fight.

Joseph Thomas, of 108, Penrhiwceiber Road, Penrhiwceiber, then entered the witness-box, and stated that he was willing to become surety for the good behaviour of the defendant. Thomas was bound over in £10 and Rees himself in £50 for the latter’s good behaviour for six months.