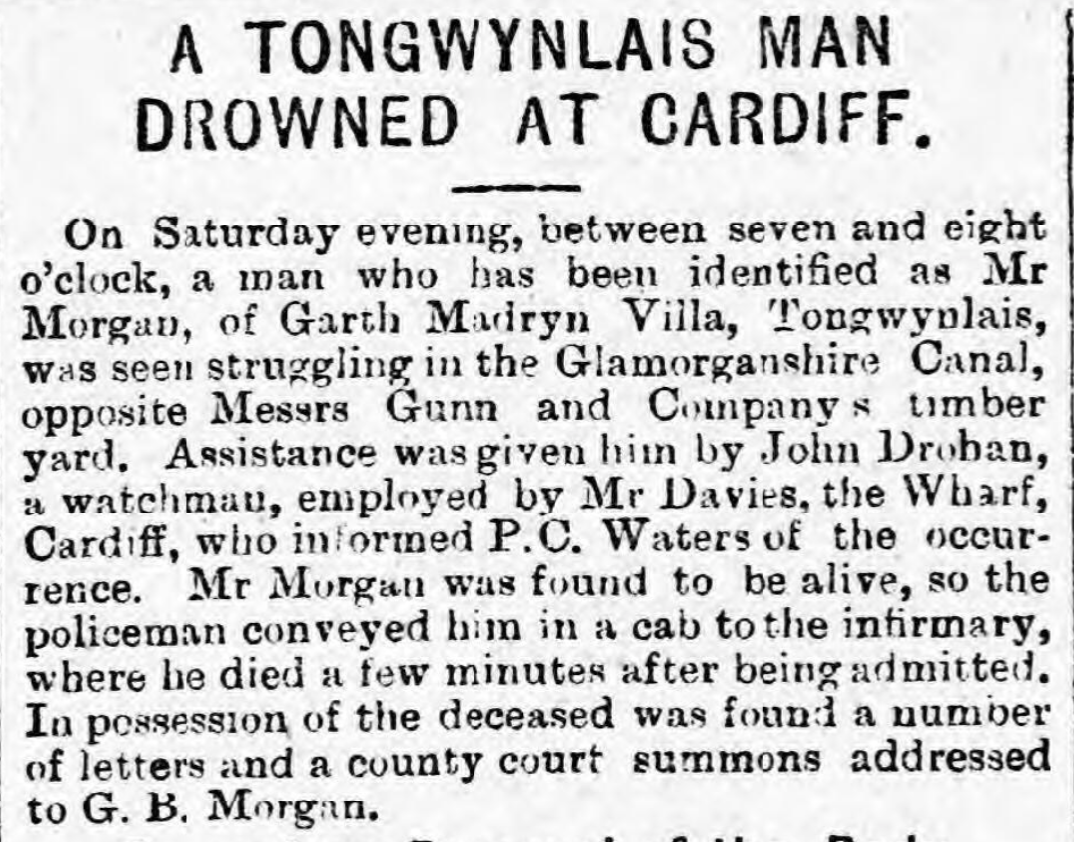 A Tongwynlais Man Drowned At Cardiff

A TONGWYNLAIS MAN DROWNED AT CARDIFF.

On Saturday evening, between seven and eight o’clock, a man who has been identified as Mr Morgan, of Garth Madryn Villa, Tongwynlais, was seen struggling in the Glamorganshire Canal, opposite Messrs Gunn and Company’s lumber yard. Assistance was given him by John Droban, a watchman, employed by Mr Davies, the Wharf, Cardiff, who informed P.C. Waters of the occurrence. Mr Morgan was found to be alive, so the policeman conveyed him in a cab to the infirmary, where he died a few minutes after being- admitted. In possession of the deceased was found a number of letters and a county court summons addressed to G. B. Morgan.

Premature Removal of the Body.

At Cardiff Infirmary on Tuesday Mr E. B. Reece held an inquest touching the death of William Morgan, aged 60, a lime merchant residing at Tongwynlais, who was found floating in the Glamorganshire Canal on Saturday evening, and who subsequently died at the infirmary. Mr J. H. Jones, solicitor, watched the case on behalf of the relatives.

William Morgan, a rate-collector for the parish of St. John’s, Cardiff, son of the deceased, said he last saw the latter alive at nine o’clock 0n Saturday morning, when he set out for Cardiff for the purpose of collecting money due to him. Witness learned of his death through the medium of the newspapers on Monday. He gave no intimation to the police, either at Cardiff or Tongwynlais, that his father was missing.

MrJ.H. Jones, solicitor, who observed that there were certain rumours afloat which pointed to the possibility of foul play having been committed, asked witness the state of mind in which his father had latterly been.

Witness said that on Saturday morning his father was in good spirits, and as cheerful as ever. He was not, to witness’s knowledge, in pecuniary difficulties.

William Henry Williams, landlord, of the Old Dolphin Hotel, Cardiff, said deceased was in the smoke room of his (witness’s) house on Saturday evening. Deceased was not drunk, but was a little under the influence either of drink or excitement.’

Mr Jones: Did you have to eject him ?— Witness Yes, but only out of the smoke room. There was a little altercation between deceased and a Mr Dix, a builder, and I ejected him. I gave deceased a gentle push and he fell on his back. Deceased was subsequently taken away by Mr Chave, of Maesycwmmer.

A watchman in the employ of Messrs Crawshay and Co. said he was at his post on Saturday night, and about half-past 7 heard a splash in the water. No cry of any kind accompanied the splash, and witness took no immediate notice of the occurrence. Subsequently he saw a man in the water, and another trying to pull him out. When extricated deceased could not stand, and he was bleeding about the face. It was a very dark night. By Mr Jones: When witness first saw deceased the latter was swimming towards the side on which witness was. Deceased was alive when pulled out of the water, but no attempt was made to revive him. About 10 minutes elapsed between the time deceased was pulled out of the water and the arrival of the cab. No one suggested the advisability of sending for a doctor.

John Drohan, a canal bargeman, said that on Saturday night he was on board a lighter lying off the West Wharf. Hearing a cry of” Here he is,” he jumped ashore and saw a man in the water about two yards from the side. Witness drew him to the side with a bar of iron. On getting deceased on the bank, witness and others placed him on his stomach, and “worked him about with a view to reviving him. Witness, with the constables, afterwards conveyed deceased to the infirmary in a cab.

The next witness was a little girl of 10, daughter of Mr Manders, of the Rising Sun Hotel, the Hayes. She was, she said, with her aunt on the bridge by Wharf-street on Saturday night, about 7.30, when she heard someone cry out “Murder” twice and then Hell.” Afterwards she beard a bubbling m the water. She did not notice anyone on the banks of the canal.

P.C. Waters gave evidence as to sending deceased to the Infirmary in a cab.

Mr John Rees, acting house-surgeon at the infirmary, said he saw deceased a few minutes after his arrival in the cab. He was then dead. The forehead and right eye were bruised. Did not notice a cut on the forehead.

At the request of the Coroner, who remarked that the body was certainly cut about the forehead, witness here left the room for the purpose of again examining the body. On his return he announced that since the opening of the inquiry the body had been removed.

The Coroner: What, removed Then it must be brought back again. Who gave permission for its removal?

Both Inspector Cox (on behalf of the police) and Mr Rees having denied giving permission, Mr Morgan, JUD., said he had instructed the undertakers to “bring the coffin.”

The Coroner: Well, they have 110 right to remove the body, and it must be brought back.

Mr Rees: I am quite satisfied that death was due to drowning, and the dresser tells me that the cut on the forehead was only of a very slight character.

The Coroner: I must have positive evidence on that point. I told the police inspector to instruct the medical man to make a thorough examination, and if necessary, a post-mortem. The body must be brought back, and I think we had now better have a post-mortem. In the meantime the inquiry will be adjourned.

On Wednesday evening Mr E. B. Reece resumed his inquiry at the Cardiff Infirmary into the circumstances attending the death of William Morgan (60), lime merchant, of Tongwynlais, whose body was found floating in the Glamorganshire Canal on Saturday. The inquest had been adjourned from Tuesday evening in order that a post-mortem examination might be made.

Mr John Rees, acting house-surgeon at the infirmary, re-called, said that upon examining the body he found a number of bruises on the face. There was an extensive bruise over the right eye. brow, and there were several scratches on the cheeks. The other external marks comprised half-a-dozen scratches on the right eyebrow, a transverse cut on the upper part of the bridge of the nose, an oblique cut about the middle of the nose, and two small scratches on the top of the right hand. None of these injuries were in themselves dangerous, and he was of opinion that they were caused by falls. He had made a post-mortem examination of the body, and was of opinion that the cause of death was suffocation from drowning. He did not think it likely the man would have recovered if he had been medically attended within a few minutes of his being rescued from the canal. When the deceased was brought to the infirmary, he (witness) detected the smell of drink—beer, he should think.

Sarah Howell, wife of Thomas Howell, a weaver, of Caerphilly, said that on Saturday evening last, accompanied by her little niece, she was walking along the canal bank on the east side of the East Wharf, about a quarter-past seven o’clock, and was about to go over the canal bridge, when she heard a splash in the water, and the voice of a man crying murder,” murder,” and help,” proceeding from the opposite side of the canal.’ Directly afterwards she met three men,” and to them she at once communicated the fact that she had beard a man in the canal crying for help, and thereupon the man again cried help.” She was sure there were no men on either side of the canal when she first heard the splash in the water.

By Mr Jones: It was possible that if there had been a couple of men on the other side when the man got into the water they could have got away without her seeing them. Superintendent Price, in reply to the Coroner, said the hotel was the last place they could hear of deceased before he was found in the canal. The Coroner, in summing up, said the deceased had been ejected from the Dolphin Hotel because of his quarrelsomeness, and his (the coroner’s) experience was that if a landlord could be got to admit that a man was “a little the worse for drink,” they might generally conclude that the man was as drunk as he well could he. The jury found a verdict to the effect that the man died from drowning, but there was no evidence to show how he got into the canal.