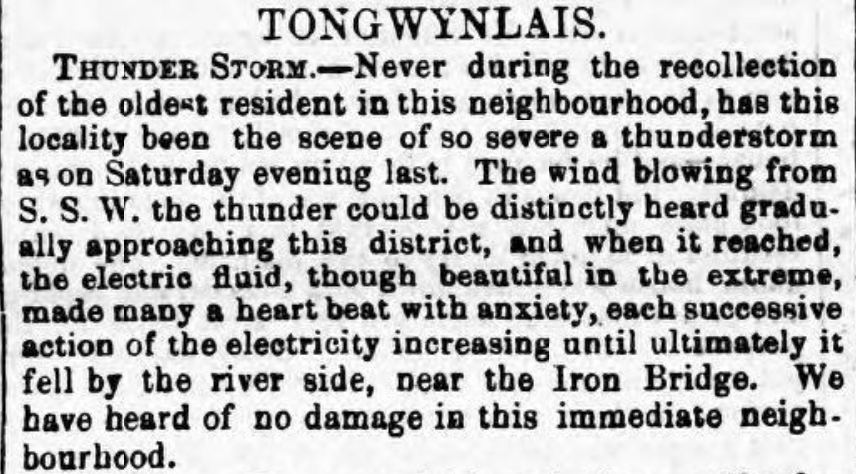 Never during the recollection of the oldest resident in this neighbourhood, has this locality been the scene of so severe a thunderstorm as on Saturday evening last. The wind blowing from S. S. W. the thunder could be distinctly heard gradually approaching this district, and when it reached, the electric fluid, though beautiful in the extreme, made many a heart beat with anxiety, each successive action of the electricity increasing until ultimately it fell by the river side, near the Iron Bridge. We have heard of no damage in this immediate neighbourhood.

The annual fair took place on Monday last, when a few of the usual rustic sports took place, but in consequence of some slight disagreement at the commencement, through a lot of roughs, the party who kindly undertook the distribution of prizes, very wisely and creditably declined having anything further to do in the matter. There were thousands of pleasure seekers, and judging from the usual small attendance, taking the two last fairs as precedents, it demonstrates the increasing population of this thriving district.

Since its recommencement, six weeks ago, the demand and the supply have been steadily on the increase. We hear it is intended to roof it entirely in, which we deem an absolute necessity before the cold winter nights set in.