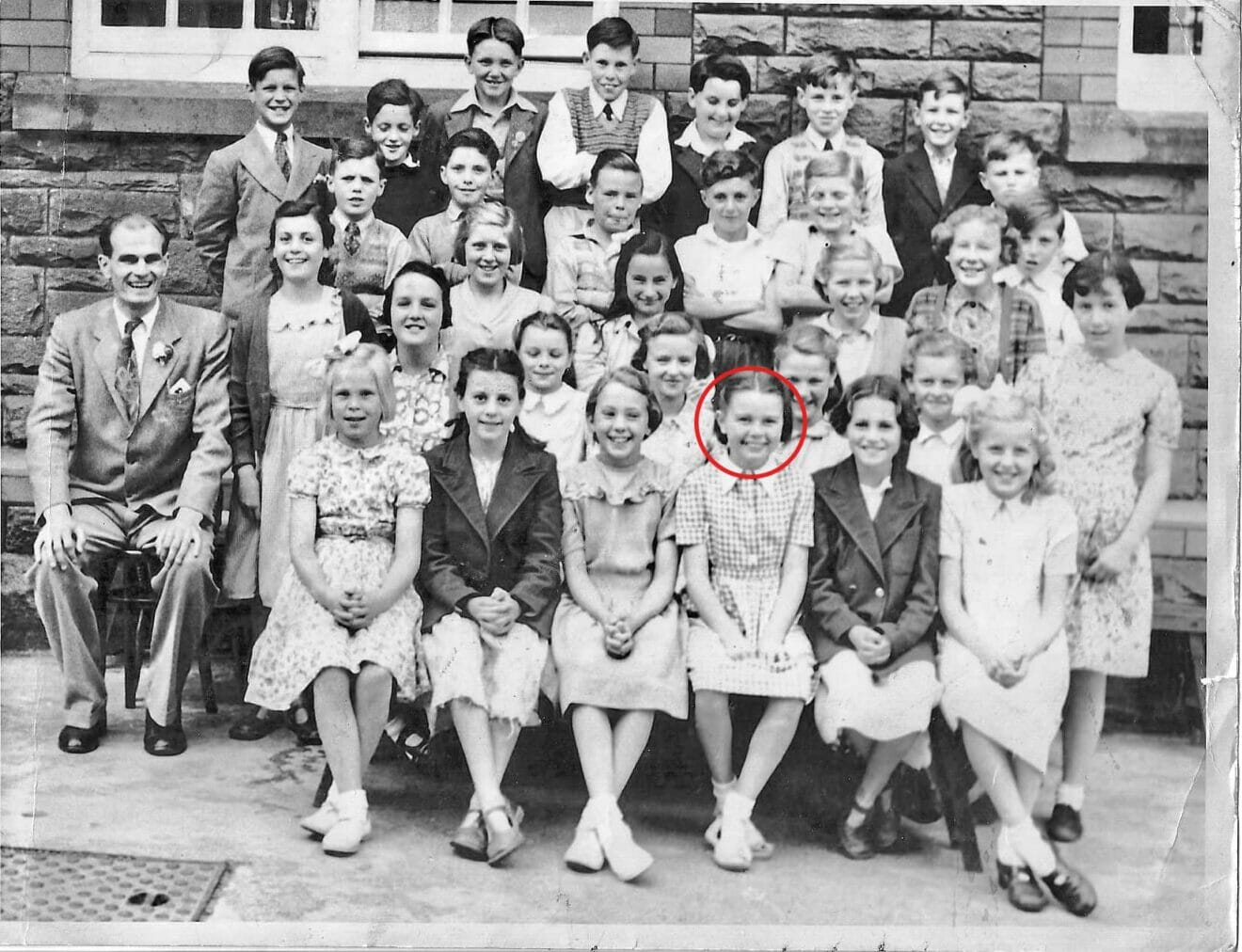 I was recently contacted by Val Bowden (nee Davies) who had written a memoir of her childhood in Tongwynlais.  ‘I Have Often Walked Down These Streets Before‘ is Val’s personal account of the village from 1942-1970.  Val notes, “My memories may not be the same as others memories but they are simply the way I remember those years.”

Val kindly sent me a copy of her book which I digitally scanned.  With her kind permission her book can be read below (it may take a little will to load, so read through and come back to it).

Val also send me some photographs that we are trying to put names to faces so if any readers can contribute further please get in touch.

This photo of the top class was taken in 1952, and we were a combination of two year groups, under the tutorship of Mr Emery, who was to give us our first experience of real teaching. Our previous teachers, Miss Jenkins and Miss Phillips didn’t really teach us a thing. All I can remember of their teaching, was that we had sums before playtime each morning and English after play. In the afternoons we would have dictation or spelling, sometimes we would go to the hall to sing; usually National Songs of Wales, when we sang songs such as “Dafydd y Garreg Wen”, every time. Sometimes the boys would go out into the strips of garden to dig out the weeds while the girls stayed in the classroom to knit dish cloths! All extremely beneficial, I don’t think! So, we all found the charismatic, progressive and demanding teacher to be our hero. We all loved him! My book has a section about Ton School. I can’t recall if your Dad went to the village school: I think he may have gone to Monkton House with Michael and Stuart Craddock and David Hall. Remember, all these people are now nearly 80 years old. 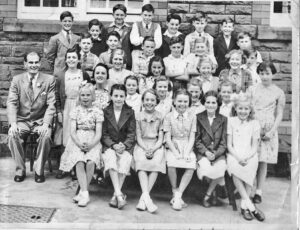 I then showed this image to my Dad and Ton boy John Llewellyn,

Many thanks for the school photos. I can remember many of the faces on there but mostly the boys. Perhaps girls at that stage were almost foreign beings!  One of them however was Ann Carpenter and since she went to Whitchurch Grammar ,as did I, we often used to catch the same bus to school.Perhaps that was the start of a stirring in the loins for the opposite sex. She was however a few years ahead of me and age at that time of life seemed to be a major barrier to anything other than pleasantries Ann married a very nice bloke called Ken Mortimer who I think was in the police force and I think we all thought he had made an inspired choice. Anthony Evans was the son of John Evans who was the accountant for the Castle Farm business for many years. We still have the records of his audited accounts for the farm, and his fees. He was a good friend of my father, Garfield, your grandfather, who you knew very briefly as he passed away a couple of years after you were born.

Danny Thomas was a really loud and aggressive character who I played football with for the Ton second team when I was 15/16 years old. With him and Dai Lloyd in the team the number of sending offs those two incurred must have reached double figures every season. Lyn James I have know since those days not so much through football but in the eighties when I joined Radyr Golf Club,Lyn was a member at a similar time. Lyn was an excellent footballer and must have been close to playing for far higher clubs than Tongwynlais. His boys seem to have inherited the “gift” and after a spell with Cardiff City I think one of his younger boys went to play for Yeovil Town. His elder boy Hugh was Club Champion at Radyr and is an excellent golfer who now works for Footjoy, the golf equipment company.

Brynmor Edwards was Ton through and through. He married Pat Jury and they adopted two boys. Brynmor went to every village funeral for well over 40 years and knew virtually everyone in the village. Many years ago Brian Lewis asked me if I would like to go a lunch in the Lewis’s on a Tuesday and up until the Covid pandemic we were still meeting.The original crew was Brian, Owen Williams(Castle Rd) Brynmor, Howard Sambell(husband of Hetty) Byrnon Jones(Cae Lewis aka Jonah) and of course the best man at a certain wedding, Roger Walters. We do however, have great fun and I hope that when all this is over we will meet again.

Duncan Bowden I knew well for many years but Howard Stevens I did not recognise, although I did meet him in the Lewis’s many years ago dressed in all white jeans and shirt with gold chains ,rings and bracelets galore.Apparently he his one of the top hairdressers in Houston Texas and by the look of him has done very well.  Phillip Jones (aka Crunchie) is still around and I see him occasionally in the pub.Philip Evans(brother Malcolm who was in my class) ran a company in Bedwas making garden sheds and other wood products . Val’s memory of the village in those days is phenomenal  and since we are facing a lockdown perhaps you could let me have her book back so I can invoke some further memories of those past times.  Also send my best regards to Eldon who was also a great footballer for the Ton team. I have tried to meet him the many times I have played Southerndown Golf Club but sadly we have not met for about 50 years.

This photograph was taken in 1951/2  Maycrete Hut, the one-time drama centre of Tongwynlais. Probably long gone as its poor state was evident last time I saw it when in1970 I moved from Ironbridge Road, it was one of two huts behind the school, which was used for meetings, occasional concerts and children’s musical productions.  The lady who organised these musical shows lived in Castle Road, and we had to go to her house to be auditioned for a part, and if selected we were expected to go regularly to her home to rehearse.  Mrs Blodwen Lloyd, who many of us called Aunty Blod, had a positive effect on children who were living in austere times. The only other outlet for us to mix with other children was by going to ”Band of Hope” a weekly meeting held in some of the chapels in the village.  Once the Village Hall was reopened after a long period of closure for some reason, the last of the shows was held there.  I did not take part in the latter productions, but I was the pianist.
How many can you recognise here? If you want me to name them for you, please let me know. 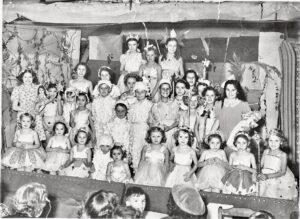 I came across this on the internet yesterday, and  just had to share it! 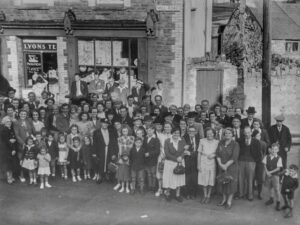 Hope you’ll enjoy looking at it. It appears to be an organised trip to somewhere.  Such trips were very frequent in those post WW2 days. I recall many coach trips organised by various people in the street. But I have no memory of this one or the reason for the formality of the group in readiness for being photographed. The clue to it being a coach trip is because the bus drivers are standing at he back, and Mr Bennet’s PVC badge is reflecting in the sun.  I estimate that it was taken in 1950 or slightly earlier: judging by my size I was no more than 7 or perhaps 8.years old. My brother, Clive looks about 2 or 3.  I don’t understand the mix of people, though. There is such an enormous age range, but not many from my age. I can’t imagine that the destination was a seaside resort because of the large number of senior residents who are there.

You are not old enough to know any of the people in the picture, but I am the girl at the front with my arms around my brother, Clive. My gran, Ann Davies, is the lady who is laughing. In the centre of the picture.  My father is standing at the end of the last but one row with my mother’s half face in front of him.  I am able tot identify many of the group. Ask John to look at the fairly large number of Castle Road residents who are present.

Update – Meryl Plummer got in touch to put a few more names to faces in this photograph.

Hi, I recognise some members of the group in the last photograph- my late mum, Hilary Evans on the left, second row,  with dark hair and a broad smile and my grandfather Jack Dalewood (Edward) on the left with a hat on and a cigarette in his mouth. The photo was taken outside Dolphins shop at the bottom of Mill Road.

If you would also like to contribute to this story or add some names to faces, please get in touch.