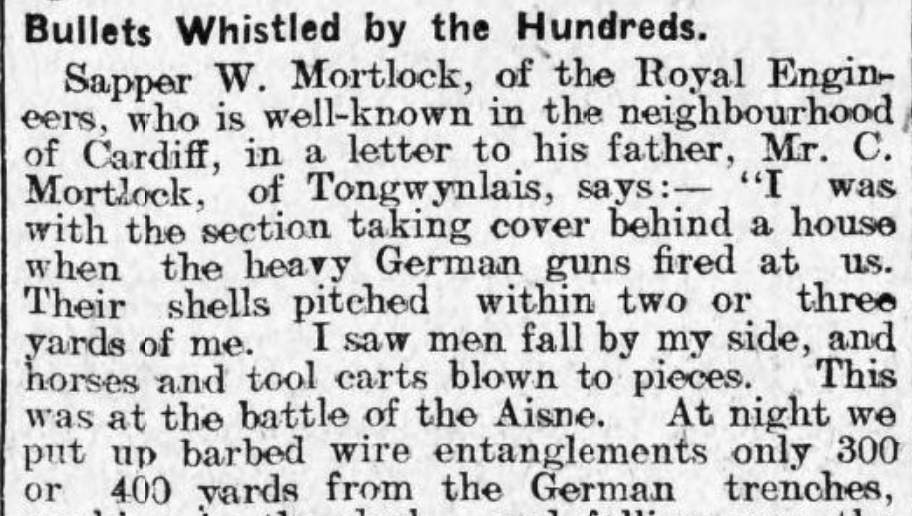 Bullets Whistled by the Hundreds

Bullets Whistled by the Hundreds.

Sapper W. Mortlock, of the Royal Engineers, who is well-known in the neighbourhood of Cardiff, in a letter to his father, Mr. C. Mortlock, of Tongwynlais, says:— “I was with the section taking cover behind a house w hen the heavy German guns fired at us. Their shells pitched within two or three yards of me. I saw men fall by my side, and hors-es and tool carts blown to pieces. This was at the battle of the Aisne. At night we put up barbed wire entanglements only 300 or 400 yards from the German trenches, working in the dark, and falling over the German dead, who were left lying on the field in hundreds. At night the Germans burn villages, and there are times when the heavens are bright with the blaze of the ties. I was at Mons, Landrecies, Aisne, I was at Mons, Landrecies, Aisne, Marne, Lille and several others, always in the thick of it, and finally got wounded at Ypres. We had to run across a field under deadly fire about 200 yards from the enemy. We were sent to blow a house down. It was just getting light, and they could see us. However, some of us got across and some fell. A sapper behind me was shot dead, and several were wounded. I was lucky again, and got across, Bullets whistled by in hundreds. Those of use who got across raced into a house for cover, got upstairs, made holes in the wall, and opened fire on them. I dropped a good many that morning. Our shells were pitching in their trenches when they began to run out of them, and we were popping them off.”