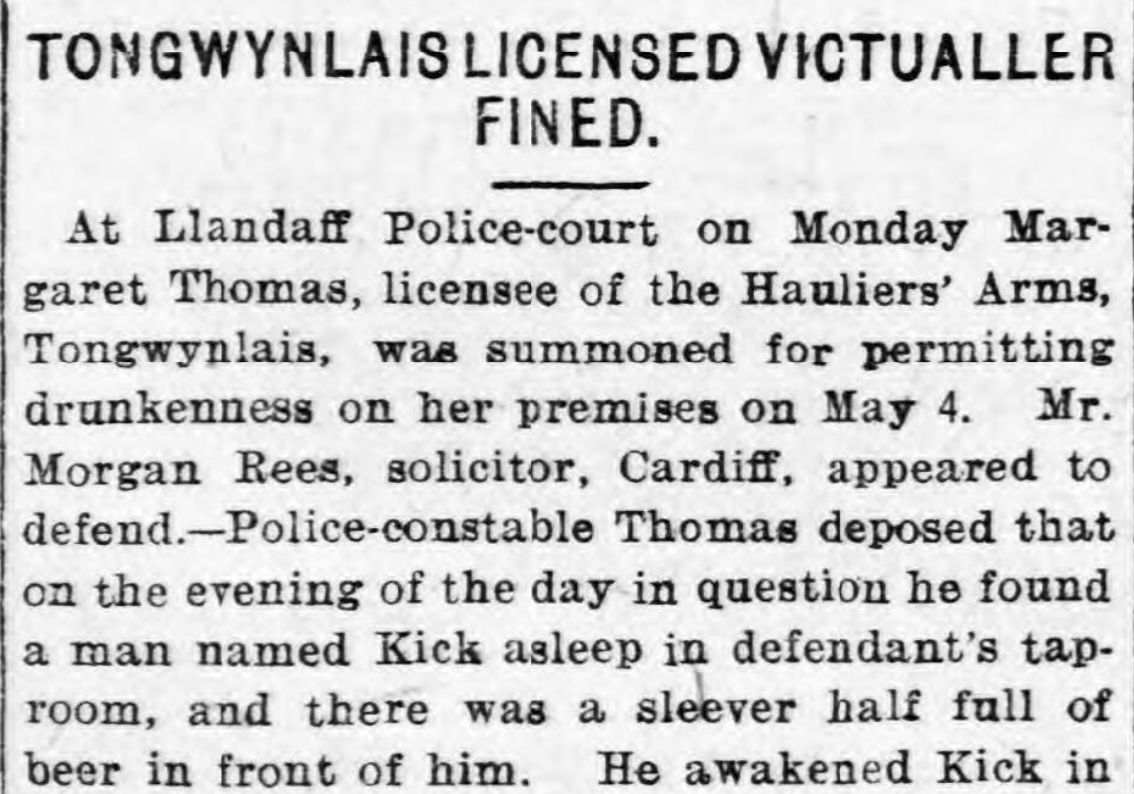 At Llandaff Police-court on Monday Margaret Thomas, licensee of the Hauliers’ Arms, Tongwynlais, was summoned for permitting drunkenness on her premises on May 4. Mr. Morgan Rees, solicitor, Cardiff, appeared to defend Police constable Thomas deposed that on the evening of the day in question he found a man named Kick asleep in defendant’s tap- room, and there was a sleever half full of beer in front of him.

He awakened Kick in the presence of the landlady, and found that he was drunk. Mrs. Thomas said, “he is lodging here.” She left the room, returned with another man, and said, “The drink belongs to this man.”

Witness subsequently learnt that Kick lived in Wyndham- street, Tongwynlais.  In cross-examination by Mr. Rees, witness admitted that Kick had told him he had had a quarrel with his wife, but did not say that he was staying at the Hauliers’ Arms. Kick could not talk coherently in the tap-room; he did not seem tired. Witness’s reason for saying that the man was drunk was that he could not stand steady. Police-constable Jones gave corroborative testimony.

For the defence. Mrs. Thomas affirmed that Kick came to her and said he had had a quarrel with his wife. She agreed that he and his child should stay at her house for a week or so. The beer found on the table in front of Kick was supplied by her tea man Edwards. Kick was very tired and not drunk when the police-constable awakened him. She had not supplied Kick with any drink since the afternoon, and this was 9.45 at night.

Thomas Edwards, dock labourer, Cardiff, present on subpoena, said that the beer discovered in front of Kick was his, and he told the police-constable at the time. In his opinion Kick was not intoxicated. The Bench imposed the mitigated penalty of 20s. and costs.