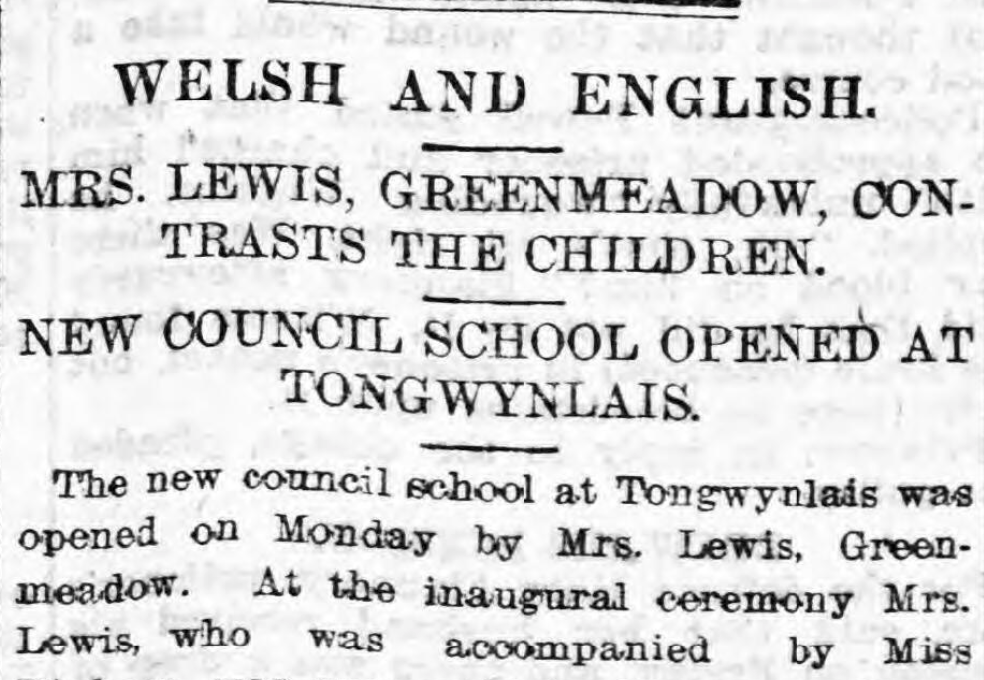 The new council echool at Tongwynlais was opened on Monday by Mrs. Lewis, Greenmeadow. At the inaugural ceremony Mrs. Lewis, who was accompanied by Miss Dinham, was supported by Messrs. S. Jones and T. Evans, members of the school committee; Mr. A. H. Bullock, clerk to the grouped schools; Mr. Bryn Davies, inspector, and Mr. Pugh Jones, Cardiff.

The school children and a good number of parents were present when Mrs. Lewis unlooked the school door with a gold key, presented to her by Mr. Pugh Jones (architect) and Mr. Shaile (builder).

Mrs. Lewis, who was received with much applause, said that she was sorry Colonel Lewis was unable to be present owing to illness. The present occasion was a symbol of the great attention the English Government had been, and still was, paying to the great needs of education. In this strenuous age knowledge was all important, and it was very necessary that children should receive a thorough education.

There was one thing she had particularly noticed that afternoon, and that was the great difference between English children and Welsh. It had been forced upon her by the singing of the children. While the English children were matter-of-fact, the Welsh children put their whole heart and soul into their work and games, and this fact was plainly visible in their expression.

Mrs. Lewis then declared the school open. Mr. Bryn Daries, who followed, said that the Glamorgan County Council were a much- maligned body, but they were coping with a great matter slowly, but successfully. This authority was the first in the kingdom for buildings.

They were also well to the front with their staff arrangements. With regard to Tongwynlais, he hoped that they would shortly have a cookery and woodwork centre there. Schemes for teaching Welsh. hygiene, and mining were also being framed. The building is a stone structure, capable of accommodating 316 children, with room for ertension, and has been erected at a cost of £ 4,354, from designs by Mr. Push Jones, architect, Cardiff. The builder was Mr. Herbert Shaile, Llandaff.