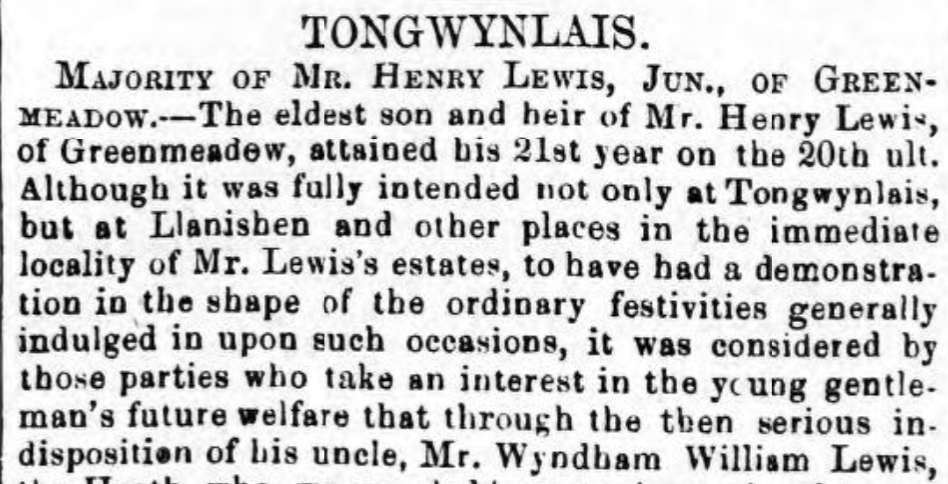 The eldest son and heir of Mr. Henry Lewis, of Greenmeadow, attained his 21st year on the 20th. Although it was fully intended not only at Tongwynlais, but at Llanishen and other places in the immediate locality of Mr. Lewis’s estates, to have had a demonstration in the shape of the ordinary festivities generally indulged in upon such occasions, it was considered by those parties who take an interest in the young gentleman’s future welfare that through the then serious in- disposition of his uncle, Mr. Wyndham William Lewis, the Heath, who, we are glad to state, is now in a fair way to a state of convalescence, desirable to abandon public ceremony; but in lieu of, and to appease the disappointment it may have occasioned to those who were bent upon what we may term a jolly flare up, through the suggestion of Mr. Jacob Lewis, Radyr farm, and Mr. David Williams, and a few gentlemen connected directly or indirectly as tenants of the family, they determined upon giving a quantity of beer in all the inns and beer- houses in Tongwynlais, where all the inhabitants who desired to drink to the health and prosperity of the young gentleman could do so; and we need not state, that the occasion was made available by a number of those who have known not only the son, but the much respected father from their infancy.

However, we must state that not even one person have we beard over indulged in the plentiful supply of ewrd-da given them, but sufficiency combined with moderation was the order of the day.