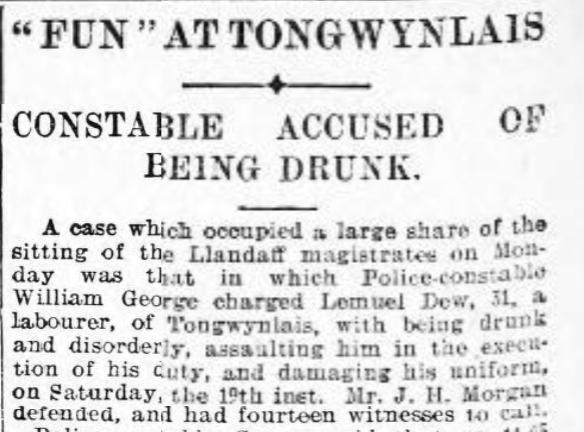 Constable Accused Of Being Drunk

CONSTABLE ACCUSED OF BEING DRUNK.

A case which occupied a large share of the sitting of the Llandaff magistrates on Monday was that in which Police constable William George charged Lemuel Dew, 31, a labourer, of Tongwynlais, with being drunk and disorderly, assaulting him in the execution of his duty, and damaging his uniform, on Saturday, the 19th. Mr. J. H. Morgan defended, and had fourteen witnesses to call. Police-constable George said that at 11.45 o’clock he saw defendant drunk and disorderly at Tongwynlais. When remonerated with defendant hit him in the mouth, and there was a struggle. Witness’s helmet flew off, and prisoner put his foot on it, causing damage to the extent of 6s. 6d. Defendant was biting and kicking witness with all his might, and the mark of a bite was still noticeable on his hand. Defendant was taken away by his friends, but he was arrested at his home at 12.45 o’clock the same evening, when witness had got two officers policemen to arrest him.

The constable’s helmet was produced, and showed signs of very rough treatment, being flattened out like a pancake. Mr. Morgan submitted witness to a long cross-examination, with the object, as he said, of showing that the constable was muddled with drink, and had insulted respectable residents of Taff’s Well. Police-constable George indignantly denied that he had had drink at the Lewis’ Arms, or that he was cracking a hunting whip outside the public-house, and that the landlord was shouting, “Tally ho!”

A lad named Wilfrid Dyke, Shakspeare Street, Cardiff, was called for the prosecution, and said that the landlord of the Lewis’ Arms came out and said, “Stand by me, constable, and I’ll protect you.” (Laughter.) Police sergeant James Davies said that when he saw Police-constable George he was bleed- ing from the mouth, with a couple of teeth loosened. His helmet was smashed, and the uniform all covered with mud. One of his hands was skinned. They arrested defendant, who said, “I am very sorry about this, sergeant. I had a couple of pints of beer, The constable asked me to go away, and then shoved me. I lost my temper, and I hit him in the mouth.”

Theophihis Laird, ironworker, of Tongwynlais, was the first witness called for the defence. He said that Police-constable George came to a little company standing outside the Lewis’ Arms, and accused one of them, Kreutzer, of using obscene language, at the same time striking him on the back of the neck. Later on the constable singled Dew out from a company of six and pushed him, telling him to go home. Dew said, “All right; I’ll go home, but you need not push me.” The police-constable then struck Dew in the mouth. Dew took his coat off, and struck the constable, after which there was a. struggle, and both fell. Dew being underneath. There was no doubt but that the police-constable struck the first blow. John Wright, one of the “Sons of Temperance,” of Tongwynlais, John Matthews, a tinworker, Daniel Stephens, another tin- worker, Edward Davies, grocer, Mrs. Elizabeth Davies. wife of the latter. Mrs. Ann Jakeman, and other witnesses spoke in defence. The Chairman (Colonel Forrest) said the Bench had carefully considered the case, and they wished to state that the police a very difficult duty to perform in the Tongwynlais and Taff’s Well districts, especially on weekends. They did not believe that the police-constable was the worse for drink, but they dismissed the case.