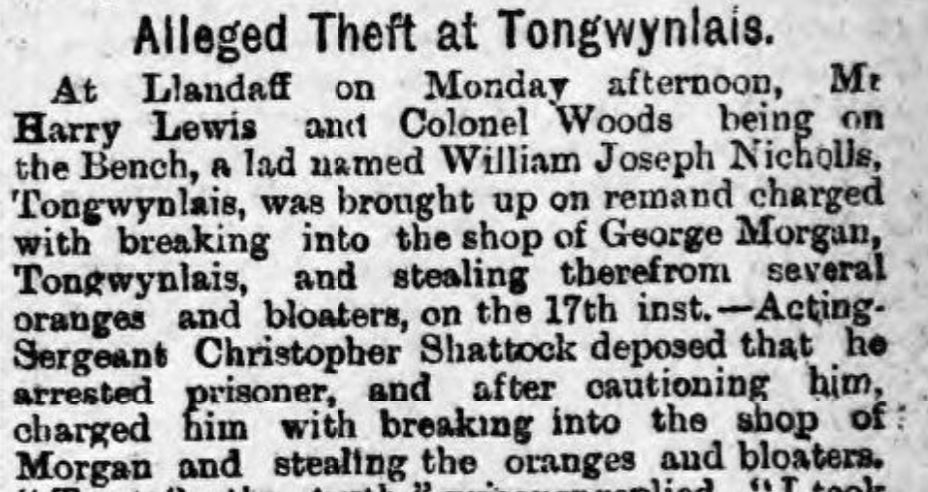 At Llandaff on Monday afternoon, Mt Harry Lewis and Colonel Woods being on the Bench, a lad named William Joseph Nicnolle, Tongwynlais, was brought up on remand charged with breaking into the shop of George Morgan, Tongwynlais, and stealing therefrom several oranges and bloaters, on the 17th inst. Acting Sergeant Christopher Shattock deposed that he arrested prisoner, and after cautioning him, charged him with breaking into the shop of Morgan and stealing the oranges and bloaters. “To tell the truth,” prisoner replied, “I took the oranges—I do not know how many—and one bloater.”

Witness examined prisoner’s hands and found blood on the right hand, one of his fingers having been cut. There was also some blood on some paper on a dish in the window. Mary Morgan, wife of prosecutor, a green-grocer, said that she secured the place on the night of the 16th, and retired to rest at 11 o’clock. Early on the following morning she beard a noise, and afterwards ascertained that the pane of the shop window had been broken.

Witness missed three or four dozen oranges and four or five bloaters, and gave information to the police. A boy named John Tyler said that he saw prisoner on the morning of the 17th inst. eating an orange on the ash tips of Pentyrch Tin-plate Works, which he said a boy named Osborne had given him. Witness also picked up the bones of a bloater (produced) near where prisoner was standing.—Other evidence having been taken, the magistrates sent prisoner for trial at the Assizer to be held at Cardiff.