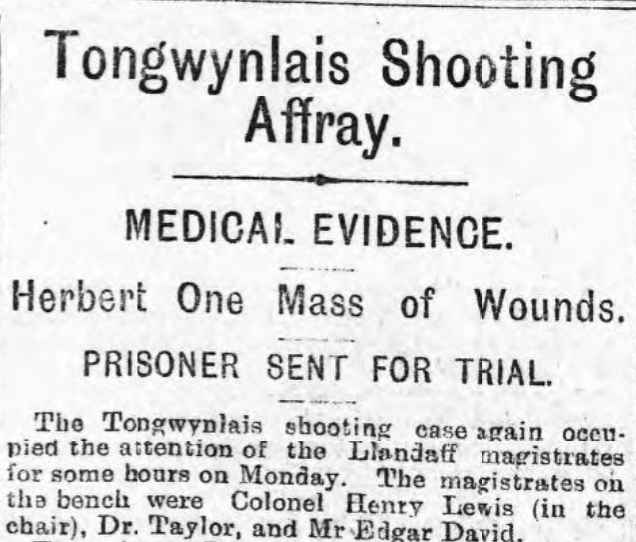 Herbert One Mass of Wounds.

The Tongwynlais shooting case again occu- 1 pied the attention of the Llandaff magistrates for some hours on Monday. The magistrates on the bench were Colonel Henry Lewis (in the chair), Dr. Taylor, and Mr Edgar David. The prisoner John Henry Prickett, aged about 45, was brought up in custody charged with having been guilty of shooting with intent to kill one John Herbert, boatman, on the canal bank, Tongwynlais, in the parish of Whitchurch, on October 21st, 1903 also with unlawfully cutting and wounding the same John Herbert by striking him about the bead and face at the same time and place.”

Mr Harold LIoyd prosecuted, and, Mr F. W. W. Edmunds appeared for the defence. The case was mentioned in court on Monday last week, but was not then proceeded with, the prosecutor not being well enough to attend.  The magistrates then agreed to grant bail for Prickett’s release, but be was unable to find the necessary sureties, and so was detained in custody.  The evidence given by Sergeant Canton when the case was before the Court on October 22nd was read over, The sergeant deposed having arrested prisoner in his house on the night of October 21st, and told him he was charged with shooting John Herbert that night. Prisoner replied, I shot at him to frighten him. He came for me with a poker, and I stopped him. What would you do ?” There was an old muzzle loading gun in the corner of the room, and the sergeant took possession of it. Prisoner said “Yes, that is the gun,” and added, Here’s the poker,” picking up a poker from the fireplace. The poker was stained with blood, and the gun appeared to have been recently fired, for the officer on inserting his finger in the muzzle found it was smeared black. Replying to the formal charge at the Taff’s Well Police Station.

Prisoner I said— You have accused me, wrongfully; I only shot at him to frighten him. He I came for me with the poker. He went into the house and fetched the poker and, and came for me with it, and struck me across the arm. What I done I done in self-defence, and I’ll stand the law for what I did. I hope I have not hurt him. I am sorry if I have. I went to the house and fetched the gun out. We had a scuffle, and I gave him a couple of welts with the poker.

In detailing the facts of the case, Mr Harold Lloyd pointed out that the doctor’s evidence would show that the prosecutor was one mass of wounds, many of them clean cut such as could not have been inflicted either by gun or poker. As to prisoner’s plea of having acted self-defence, the evidence pointed to the probability of prisoner having first shot the prosecutor and then attacked him, probably with a knife, while Herbert was unconscious on the ground.

John Herbert, the prosecutor, who appeared in the box with a shade over his eye, said he was a boatman living at the Lock Ganol, Tongwynlais. On the afternoon of October 21st he met prisoner in the Old Ton public-house, Tongwynlais, an] paid for a few drinks for him and lent him a shilling. Between 8 and 9 p.m. they left the public-house and started home together along the canal bank. At the railway bridge, 100 yards from his (witness’s) house, prisoner said, Stop, Jack, I’ve got a good mind to kill you.” He (witness) answered, For what, Harry?” and Prickett said,” You ****’ and I called him a foul name. Then Prickett let go at him with his fist. He had nothing in his fist. Witness continued: I ducked behind the pillar, and he missed the blow. I then got round the pillar of the bridge and went in the direction of home along the towpath. Prisoner followed along the towpath to the road. When near the weir he said, “Stop a minute, you **** I’ll put you right now.” He ran on to his house and I went on to my house. The Chairman Had you had any words previously in the evening ?—Not a word, sir.

Continuing his narrative, witness said, ” I went to the house, got a poker, and went to meet him. I knew be had a gun, and I was afraid he was coming to shoot me, the wife, and the children and all. When I had gone about 50 yards towards his house I heard the prisoner cry out, Jack, is that you ? and I answered Yes, my handsome.” He; said, “Come on you and I then jumped the weir towards him. When I got on the bank on the same side as he was he stood about seven yards from me and higher up. As soon as I put my foot the other side I got shot, and I know no more.” Mr Lloyd you don’t know who shot you ? “No down I went, and I remember no more. I was shot somewhere about my eye, and I thought mv head was gone off altogether.”

Before you were shot had you used the poker on this man ? No, sir. Or had you a scuffle with him ?—No, sir.— Further examined, witness said he had had a few glasses during that evening, but he was not under the influence of drink. Cross-examined by Mr Edmunds, witness said he bad known prisoner six or seven years, and I they had always been the best of friends. He went to meet prisoner on this night to prevent prisoner coming to the house. Son Threatened. Thomas William Herbert,’ a young fellow of about 21. the son of the prosecutor, said that about 9.20 on the evening in question his father came into the house at Lock Ganol, and picked up the poker. Witness watched him going out of the house. Two minutes afterwards witness beard his father cry out Tom, Tom,” and then he heard a shot. These were the only two sounds he beard. He ran down the bank and found his father lying down. His face was all over blood. There was no one else there then. Two minutes later the prisoner came up. Witness said, Don’t fire here again, Harry,” and he said, You better slip it, or I’ll well shoot you and kill you.” Mr Lloyd And then you did” slip it.” did you? “Yes.

Witness added that he went for assistance. He noticed that Prickett bad something glittering in his band. The Chairman Were you afraid of him ?— Yes, sir I thought be had a gun in his hand, and 1 got away. Dr. Taylor: What became of your poor father 1-1 left him on the bank. When I went back from the Ton I found him in the house. Shot and slashed. Dr. Robert James Riseley, Taff’s Well, said be saw Herbert at his house at about 10 p.m. on. October 21st. On examination he found be was suffering badly from shock, and was bleeding pretty freely. There was a wound on the inner side of the right eye. apparently caused by pellets. He (witness) bad not extracted any of the pellets-they had gone in too deeply. He had probed for them about three inches. There was an opening there down that far. There were two separate round holes on the inner side of the right eye. On the right temple were two cuts, one an and the other an inch and a half long, and down to the bone. There was contusion over these two cuts. There was a cat l.5 inch long over the right eye a Y-shaped cut at the back of the bead, four inches long two cuts through the lip on the right side one 3/4 inch cut on the chin running between the inside and outside of the lip, and opening on the inside: one cut 1 1/4 inch long on the angle of the jawbone, in the fleshy part on the right cheek one cut under the right eye 3/4 inch long three cuts over the left ear, 3 inches long. All the cuts on the cranium were down to the bone. There was a bruise on the right arm and the skin off, about the size of a shilling. Witness put about 50 stitches in these various wounds.

In his opinion all the cuts could not have been produced by such a weapon as the poker produced. The cuts on the chin, on the lip, on the jaw, and on the forehead could not have been so caused. If the whole of the wounds had been caused by the poker there would have been conclusion and some damage to the bone. With one exception they were all clean cuts, such as might have been caused by some sharp instrument. Was prosecutor at any time in danger yes he might have died from shock or from excessive bleeding. He was now- with the exception of the pellets being still in the head-out of danger. Witness did not think the sight would be injured. Cross-examined, witness said he had not seen any knife. Replying to Dr. Taylor, witness said that the Y shaped wound at the back of the head might have been caused by a fall backward. P.S. Canton. recalled, said that after arresting prisoner he, with P.C. Jones, searched his house and found a pouch containing shot, a powder flask, and to small boxes of caps.

The distance between Herbert’s house and prisoner’s I house was 176 yards. On the night of the affray witness marked the spot on the bank where he saw the blood, and from there to Herbert’s house the distance was 53 yards. Mr Lloyd So that prisoner was 123 yards away from his house, and about two-thirds of the way to prosecutor’s house. Witness produced a short clasp-knife which be found on prisoner at the time of the arrest. Cross-examined There were no bloodstains on the knife. He had no difficulty in arresting the prisoner, who handed him the gun and the poker. Prisoner did not ask to see the doctor, but complained of his arm being hurt. Mr Lloyd: Beyond that bruise on the right arm were there any cuts at all on prisoner?— None whatever. No Bail. The prisoner, who reserved his defence, was committed for trial at the Assizes. Mr Edmunds applied for bail. The Chairman Certainly not; not in such a serious case as this,