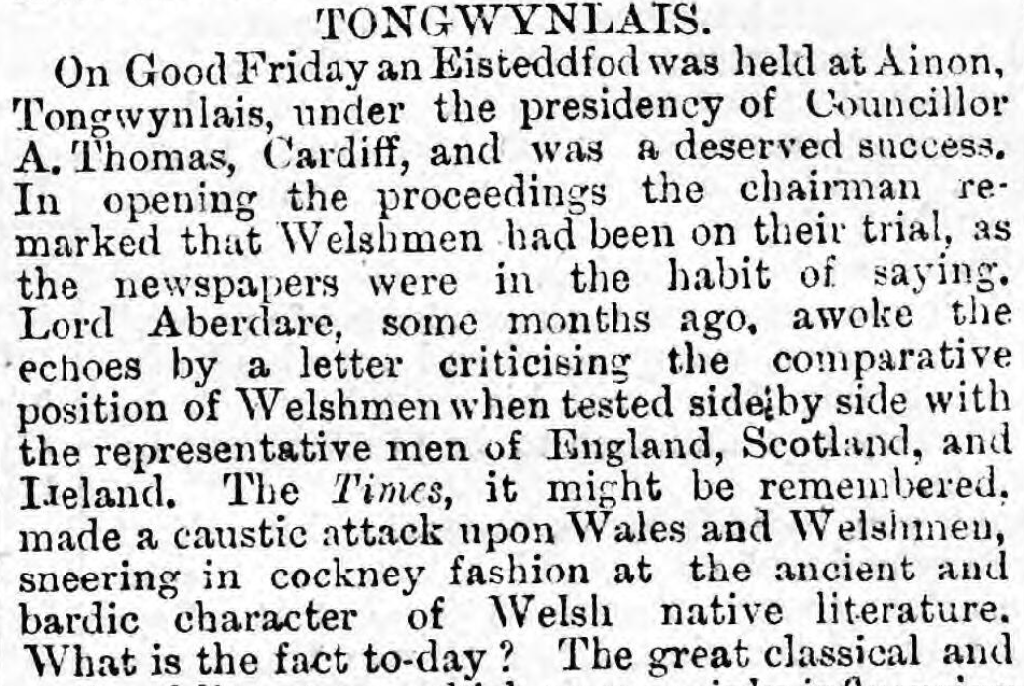 On Good Friday an Eisteddfod was held at Ainon, Tongwynlais, under the presidency of Councillor A. Thomas, Cardiff, and was a deserved success. In opening the proceedings the chairman remarked that Welshmen had been on their trial, as the newspapers were in the habit of saying. Lord Aberdare, some months ago, awoke the echoes by a letter criticising the comparative position of Welshmen when tested side by side with the representative men of England, Scotland, and Ireland. The Times, it might be remembered, made a caustic attack upon Wales and Welshmen, sneering in cockney fashion at the ancient and bardic character of Welsh native literature. What is the fact today?

The great classical and national literatures which were mainly influencing men in Europe and Asia, were old and venerable, Greek literature was the most potent educating influence in Europe, Sanskrit in India, and Hebrew in the distant East. Of all the European languages living and spoken, Welsh, in point of age, character, and literary fullness, is near the top of the tree in Europe, and necessarily claimed a direct linguistic alliance with Greek, Sanskrit. and the language spoken by the Jews. (Applause.)

He, therefore, gloried in the ancient and venerable character of our native Cymraeg, The Eisteddfed, he need not remind the youngest there, was a very ancient institution. Its origin was so remote as to be nearly lost in antiquity. In the lolo manuscripts (said the chairman), in a copy transcribed from one in the Raglan collection, it is recorded that Prydain, son of Aedd the Great, first monarch of the whole Island of Britain, instituted the Eisteddfod in the form, more or less modified, in which it has descended to our time. From that we infer that it ante-dates the Christian era by several centuries. It is true that the present National Eisteddfod little more resembles the eisteddfod of olden time than does a theatrical pageant the event which it represents—yet there is much to be commended in the institution as it is. (Hear, hear.)

These bardic conventions were held at irregular and unbroken intervals; in consequence of devastating internecine quarrels, although no convention was legal which did not conform to the laws of the Gorsedd. It would be interesting did time allow, to review its rise and progress from the reign of Pridain to the time of Taliesin the chief bard, who in himself combined the erudition of the scholar with transcendental poetical genius, and as such stands pre-eminent in the estimation of his countrymen- one whom any country would feel proud to own. (Applause.)

In his day the arts and the sciences were in exalted state of excellence, painting and poetry excepted—to which, as I am aware, the Welsh never made any pretensions. We find at this time students came from all parts of Europe to study at Bangor Iltyd the alma mater of Taliesin. The principal of the college was Cattwg the wise. I may here relate an incident m the early career of Taliesin, that may be appropriate for those who propose to “drink deep of the perennial spring,” as to the order of their studies, according to Cattwg. In conversation with his tutor, Taliesin intimated that he intended to devote seven years to acquire Greek and Latin, and afterwards would give four years to Welsh for the benefit of his nation. Cattwg replied that he must reverse the order, and give seven years to Welsh for his country’s benefit, and what he could spare subsequently to Greek and Latin. (Applause.)

Cas gwr ni chara’r wlad ai maco. We will take a long leap to the fourteenth century—the golden age of Welsh poetry—when Dafydd ap Gwilym was chief bard, whose patron was Ivor the Generous, from whom are descended the noble family of Tredegar. This prince of poets was an old bachelor, and paradoxical as it may sound, was of a most amorous turn of mind. He wrote 150 sonnets to his lady-love. Dr Owen Pugh published in 1789 a collection containing 262 of Dafydd ap Gwilym’s poems, and many more have been brought to light since among the Mostyn MSS.

The Welsh language at this period was in its greatest purity, and much credit is ascribed to Dafydd ap Gwilym in raising it to such a high standard. He was, however, far from being alone in this, when he had for contemporaries Dafydd ap Ernwni, Son Kent, Rhys Goch Eryri, lolo Goch, and a host of others. Truly giants were upon the earth in those days. (Hear, hear.) We now arrive at the commencement of the fifteenth century. Perhaps the most woeful epoch in the history of Wales. At this time Owen Glendower was in rebellion, and after his discomfiture the land was given over to rapine and pillage. At this period anything in the shape of a Welsh bard was treated by the King’s soldiers with about as much consideration as a suspected cur by an excited mob in the throes of a hydrophobia scare. (Laughter.)

To such straits were the writers of the period reduced that they could not obtain the usual writing materials, and in lieu of the vellum of former days had to engrave characters upon wooden tablets. No instruction was given except by English teachers, and no national rights were allowed to any but those who spoke English and did not know the Welsh tongue. Yet this oppression did not bring about the desired effect, but the result most triumphantly proves the futility of unduly coercive measures. Instead of extirpating the Welsh language, there was so much of it left that Dr Owen Pugh could find the respectable quantity of nearly 100,000 words when he compiled his Welsh dictionary, published in 1803. (Cheers.)

The words of the Pontypridd bard were very appropriate when he said,

We can now say the scene is changed—thanks to enlightened legislation. The Queen has no more loyal subject in her vast empire than the inhabitants of Wales. (Loud cheers.) May the ties which now unite us become stronger and stronger and our sentiments ever remain those of the bard in the eisteddfod song—

“The Shamrock of Erin so brilliant and green,

Entwined with the Leek and the Thistle has been;

O may they for ever a safe guard compose,

And grant that Great Britain for ever may be

The terror of tyrants, the friend of the free.”

We cannot but notice with what rapidity the English language is spreading in the principality, and that would give us no concern were parents less apathetic in imparting a knowledge of Welsh to the children. Bitter as it is to every lover of the Welsh language, the thought will intrude itself, that as often as we hear the village bell calling the whining school-boy with his satchel and shining morning face, creeping like a snail to school it also rings the parting to the dear old Cambria. (Hear, hear.)

It is to be regretted that there is no public library which contains anything like a good collection of Welsh literature. I have long thought that the forming of a local society for collecting and preserving Welsh works and manuscripts would meet the end of preventing so great a national loss as will inevitably accrue if some such provision is not made for their safety.  The chairman resumed his seat amid enthusiastic cheers, and the programme prepared was then gone through with spirit.